When I was in my mid-twenties and had a spiritual experience that led me to begin discerning a call to the priesthood, I went to visit my godparents who ran a school on the Navajo reservation in Gallup, New Mexico. Out of the blue one evening, my godmother gave me what was, perhaps, the most stereotypically Catholic knick-knack. It was a photocopied holy card, protected by a layer of laminating postal tape, with a little leather swatch attached.

“This is Walter Ciszek,” my godmother announced to me, as though this would provoke some instant recognition on my part. Seeing my confusion, she continued: “He lived in Poland, Ukraine and Russia. He loved the Byzantine Rite. I think you’d like him … you should read up on his life. That’s a piece of his slipper — a second class relic. My friend from church’s grandmother was friends with a nun who lived with his sister.”

I tucked the holy relic away, but a few months later, I decided to read up on him. I ordered his book, “With God in Russia,” and I literally stayed up all night reading it — I couldn’t put it down. A decade later, I write these words as a Jesuit regent — still not a priest, but now in my seventh year in the Society of Jesus. I am a Jesuit, and my life is what it is today because of Walter Ciszek, and I am an unabashed Ciszek enthusiast (I even took his name, predictably, for my vow name).

Since I “met” Walter (more than 30 years after he died), I have read everything that I can about him. He, to me, exemplifies what being a Jesuit is all about — being who we are, the best we can, in the service of Christ. He was devout, impetuous, risk-taking, stubborn and gregarious, and as a Jesuit he used those attributes to sneak into the USSR to minister to Catholics in secret and to withstand the torments of forced labor in Siberia when he was discovered.

I recently came upon a story about Ciszek in “With God in America,” which is a recent amalgamation of Ciszek’s writings and anecdotes about Ciszek by folks who knew him, compiled by John Dejak and Marc Lindeijer, SJ (a book which I very much recommend to those who haven’t read it). Unsatisfied by the brief treatment the event received in the book, I dug a little deeper — contacting people who witnessed, or were around, when it occurred. The story that emerged was beautiful, shining a light onto the quiet holiness of Ciszek, and so I share it here, because in my opinion it speaks to our call to live our Christian faith in our world today (some 50 years later).

One evening in the late 1970s, Walter Ciszek shuffled into pre-dinner social, a familiar Jesuit ritual, just he had done every single day prior for as long as he had lived in a community called the John XXIII Center in New York. This evening, however, was unusual. Rather than the typical rehash of old arguments, strolls down memory lane, monologues about politics of the election year, sports talk or the awkward silence that sometimes comes when one goes to social with the exact same folks every single night (and has exhausted all possible conversation topics), this evening the air in the Haustas room was animated and the topic of conversation was … controversial.

The hubbub centered on a crisis in the church which the Eastern Catholic priest residents of the center staffed at the time — St. Michaels Russian Greek Catholic Church — a little chapel on the campus of old St. Patrick’s on Mulberry Street in Manhattan. A devoted and prominent parishioner, who had been married for many years and who had raised his children in the church, had gone through with his plan to have a sex change operation. The entire congregation was shocked, horrified and scandalized, although not particularly surprised.

Several years before, the parishioner began presenting and dressing in a somewhat “effeminate manner” after the death of his beloved wife. Initially, although there were snickers and whispers, most folks in this church chalked the changes up to some kind of grief-induced breakdown and pitied the new widower. As it became clear that this was no temporary stage, and the person continued to present themselves as ever increasingly more feminine and dressing ever more flamboyantly, the quiet snickers changed into outright insults and pity ran out — judgment and condemnation took its place.

Some priests were outlining the theological implications of the operation while others debated the morality of the decision. Some priests cracked jokes at the parishioner’s expense — everybody, it seemed, had an opinion which he was unashamed to express — everybody, that is, except Walter. In his usual calm, deliberative, unassuming manner, he sat and listened quietly. When someone asked him for his thoughts on the matter, he had a two-word response: “I’ll go.” And with that, he got up, left the social, and went and visited the person in the hospital.

Fr. Philaret Littlefield, a friend of Ciszek and a fellow John XXIII Center resident, recalls that Walter went without fanfare and speculation and returned unceremoniously as was his wont, neither elaborating on what he saw or said. Whatever it was, it must have made a deep impression: The parishioner became a regular visitor to the center and gradually became reintegrated into the tiny St. Michael’s community.

As we recall Walter Ciszek’s death day (which will, God willing, eventually be his feast day), December 8, I think that this little story has much to teach us some 37 years after his death. Occasionally, when faced with suffering or a challenge in another person’s life, I find myself behaving just like the priests in the Haustas room. I love to discuss, to debate, to defend — to theorize, to strategize and to criticize. In other words, I love to talk, and I am not alone. Indeed, in our world and in our church today there is no paucity of words. Division foments along ideological lines and between political camps. Social media amplifies perpetually toxic discourse and hyperbolic rhetoric. Our world has no lack of words. 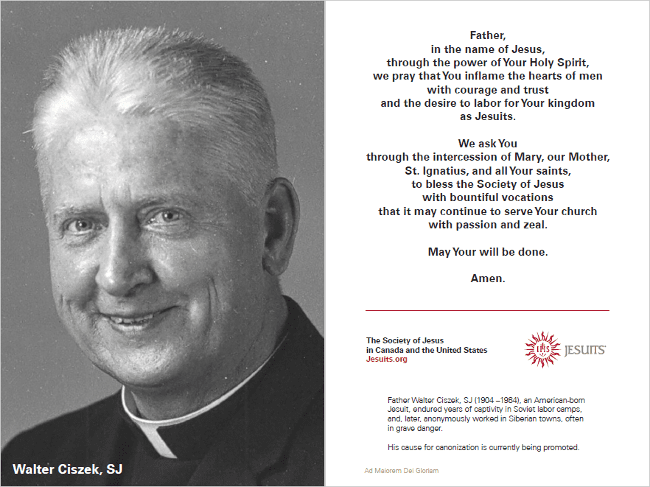 What we lack today are actions. When human beings are in pain — alienated, ill, rejected and despised, the last thing that they need is ideological discourse. Rather, they simply need someone to care enough to visit like Walter did. A person who is mourning a loss, or who is hurt by the church doesn’t need my theological ponderings — they need for me to bring Christ to them by being kind, by entering their discomfort, by allowing them to feel safe in expressing it. Although quiet, unassuming and small, one act of love does more than thousands of eloquent words to change our world for the better and to bring about the kingdom of God. Walter Ciszek, pray for us! 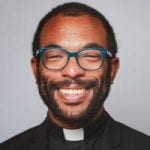 Christopher Smith, SJ, is a Jesuit scholastic who is currently teaching science at Gonzaga College High School in Washington, D.C.