What We Have Learned

Thomas and Mary (called Polly or Molly) Brown, Moses and Nancy Queen, and Isaac and Susan Hawkins (also known by Queen), were forced from the Jesuit plantation in White Marsh Maryland, to aid the Jesuits in founding the Missouri mission in 1823. They settled in Florissant, Missouri, and helped establish Saint Stanislaus, the Jesuit seminary and farm. All three couples were separated from family and kin; Moses and Nancy were forced to leave behind their children. Two more families—about 16 people in total, including Jack and Sally Queen and Proteus and Anny Hawkins (sometimes referred to with the surname Queen), and their children—were forced to move from White Marsh to Missouri in 1829. Over time, the number of people held in slavery by Jesuits grew through the birth of children, through purchases and “gifts.”

As the new Missouri Mission grew, Jesuits relied on forced labor at Saint Stanislaus Novitiate in Florissant and at Saint Louis College (now Saint Louis University). At the time, Saint Louis University and Saint Francis Xavier College Church were located downtown between what is today 9th and 10th, Washington and Lucas Streets. Enslaved people also labored for the Jesuits at missionary outposts in Saint Charles and Portage des Sioux, Missouri, as well as in Sugar Creek, Kansas. When the Jesuits began to operate Saint Louis College in 1829, they transferred several enslaved people from Saint Stanislaus Novitiate to the college in Saint Louis. Their tasks at the college were similar to those at the novitiate: farming, cooking, laundry, room cleaning, and wagon-driving. By 1831, more than 26 people were held in slavery by the Missouri Jesuits. The majority, at least 20, labored on the Jesuits’ farm in Florissant, but enslaved people were transferred back and forth between Florissant and Saint Louis. In addition to those they owned, Jesuits, local bishops and clergy, and other religious orders often lent or hired out their enslaved laborers to one another or to other slaveholders, much like they might have lent or borrowed a piece of equipment.

we heard sometimes their earnest desire to be free in a free country, it was difficult not to say almost impossible to convince them of their happiness.”
—Jesuit Felix Verreydt, writing in his memoirs about enslaved people at Saint Stanislaus.

Even as they endured violent and dehumanizing conditions, enslaved people developed ways to live meaningful lives despite their enslavement. Enslaved people supported each other as family and kin by holding gatherings, creating music and art, and sustaining rituals and spiritual practice, to name only a few of the ways individuals and communities resisted bondage.

Catholicism was very likely imposed on the earliest people the Jesuits held in slavery. Jesuits believed it was their obligation to spread Catholicism to their enslaved people and baptized many of them into the Catholic Church. Many of those forced from Maryland to Missouri, however, had been Catholic for generations and embraced the Catholic faith. In Florissant, Missouri, they were active members of Saint Ferdinand’s Parish in Florissant and those in downtown Saint Louis at Saint Louis University attended Saint Francis Xavier College Church. After emancipation, parishioners of the “colored chapel” of College Church advocated for the establishment of Saint Elizabeth Parish, the first Black Catholic parish in Saint Louis, which opened in 1873.

Enslaved people once attended services at Saint Francis Xavier College Church, likely standing or sitting in the back pews. However, in 1858, a separate gallery, labeled in this picture as the “1st Jesuit Negro Chapel” was established in the church. Black Catholics in Saint Louis, including those enslaved to the Jesuits at Saint Louis University, worshipped there for many years. Henrietta Mills married Charles F. Chauvin here in 1860. Her marriage record labeled her as a “slave of Saint Louis University.”

Learn more about her family’s story

The people held in slavery by the Jesuits consistently resisted their enslavement. Several escaped their bondage by running away or by purchasing their freedom and that of their family members.

Matilda Hawkins Tyler purchased her own freedom and that of her five sons between 1849 and 1859.

Learn more about their story

The Jesuits continued to use enslaved labor as the Missouri Mission expanded into a vice-province in 1840 and a province in 1863. As the Jesuit presence in the United States grew, Jesuits came to rely on slavery at churches, schools, and farms in Kentucky, Louisiana, and Alabama.

When slavery was outlawed in Missouri in January 1865, the Missouri Jesuits decided to make contracts for pay with the formerly-enslaved families who remained. Some people continued to work for hire for the Jesuits for several more decades. Others moved away to live closer to family from whom they had been separated and find work in Florissant and the city of Saint Louis.

Click on the image below for a PDF with information on determining if you are a descendant of the people Jesuits held in slavery in Missouri: 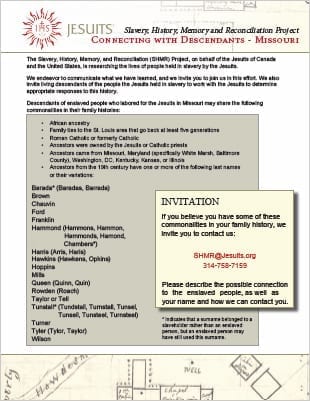