May 23, 2015 — Today, Pope Francis beatified Archbishop Oscar Romero, moving the martyr a step closer to sainthood. An outspoken advocate for the poor, Blessed Archbishop Romero was shot and killed March 24, 1980, as he celebrated Mass in a hospital in San Salvador, El Salvador, during the country’s civil war. His beatification Mass was one of the largest public events in El Salvador’s history, with an estimated crowd of 250,000 people.

Archbishop Romero called for an end to the violence and killing of civilians during El Salvador’s civil war, which lasted from 1979 until 1992. He drew inspiration from his close friend Jesuit Father Rutilio Grande, who was assassinated for his own work seeking justice for the poor in El Salvador in 1977. At Fr. Grande’s funeral, Archbishop Romero said “the liberation Fr. Grande preached was inspired by faith.” 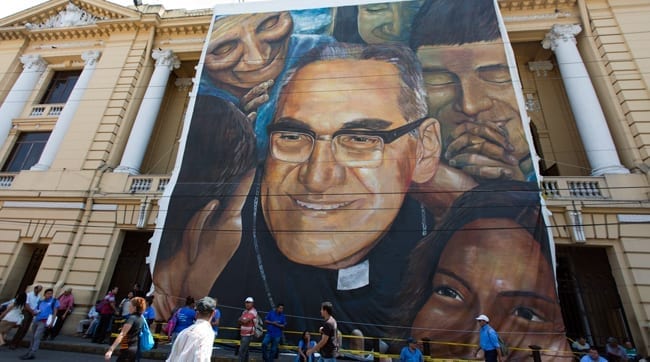 A large canvas depicting Archbishop Romero hangs on the facade of the National Theater in San Salvador. (CNS photo/Octavio Duran)

In February, Pope Francis formally recognized that Archbishop Romero was murdered “in hatred of the faith” — and not for purely political reasons.  Additionally, the Vatican announced that the sainthood process for Fr. Grande had been opened.

Scholars and theologians agree that Archbishop Romero was strongly influenced by the pastoral work with a clear option for the poor that Fr. Grande carried out in rural communities in northern San Salvador.  Speaking of Fr. Grande, Archbishop Romero said, “When I looked at Rutilio lying there dead I thought, ‘If they have killed him for doing what he did, then I too have to walk the same path.’”

Jesuit Father Tom Greene, rector of Bellarmine House of Studies in St. Louis, attended the beatification in El Salvador. “For me personally, the beatification means a great deal because Romero is a hero of mine; someone who put his life on the line for the poor when he could have softened his message to stay alive.”

In his most famous homily just a day before his assassination, Archbishop Romero called for soldiers to end to the violence in his country: “In the name of this suffering people, whose cries rise to heaven each day more tumultuous, I beseech you, I beg you, I order you, in the name of God, stop the repression.”

Fr. Greene said that Romero “had a heart for the poor because of what the poor had done for him—that resonates with my experience of working with the poor.”

At the beatification Mass, the altar had a relic: part of the shirt Archbishop Romero wore when he was fatally shot and which subsequently soaked up some of the martyr’s blood. The stage also featured a large image of Our Lady of Peace, the patroness of El Salvador. Organizers arranged a VIP area for the poor, for peasants, for the country’s indigenous people — all those Archbishop Romero favored.

The beatification is a huge validation for the work of both the Society of Jesus and other groups in society engaged in the struggle for justice in Central America, according to Fr. Greene. 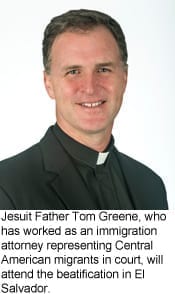 Fr. Greene also reflected on how quickly things can change. In 2001, the first time Fr. Greene traveled to El Salvador, he went to see Romero’s tomb and found it rather underwhelming: in the basement of the cathedral with a few wilted flowers and a homemade banner. When he attends the beatification Mass this Sunday, it will be with a crowd of 250,000 and over 1,000 priests. “It’s beautiful to see him get the recognition,” said Fr. Greene.  “I can’t believe that I’m going and I’m thrilled to go.”

According to Jesuit Father Tom Reese, the pope’s decision to declare Archbishop Romero a martyr may open the way for the church to move forward in the causes of other priests and nuns who were killed during El Salvador’s conflict. In 1989, elite Salvadoran soldiers killed six Jesuits, their housekeeper and her daughter at the University of Central America in El Salvador, a crime that shocked the world. [Sources: Crux,Wall Street Journal, Catholic News Service]

America Media reports from the Hospital Divina Providencia, the chapel where Romero was martyred while celebrating mass on March 24, 1980:

Society of Jesus in the United States Welcomes Overruling of Roe v. Wade
The Society of Jesus in the United States welcomes the Supreme Court’s decision to overrule Roe v. Wade. Abortion is a massive injustice in our society, and today’s ruling is a critical step toward the legal protection of all unborn children.
News
Two Jesuits Assassinated in Mexico
On June 20, 2022, in Cerocahui, Tarahumara, Mexico, Jesuit Fathers Javier Campos and Joaquín Mora were murdered while trying to defend a man who was seeking refuge in the church and who was being pursued by an armed person.
News
Jesuit Quick Hits
Here’s the latest news from the Jesuits in Canada and the United States.
News